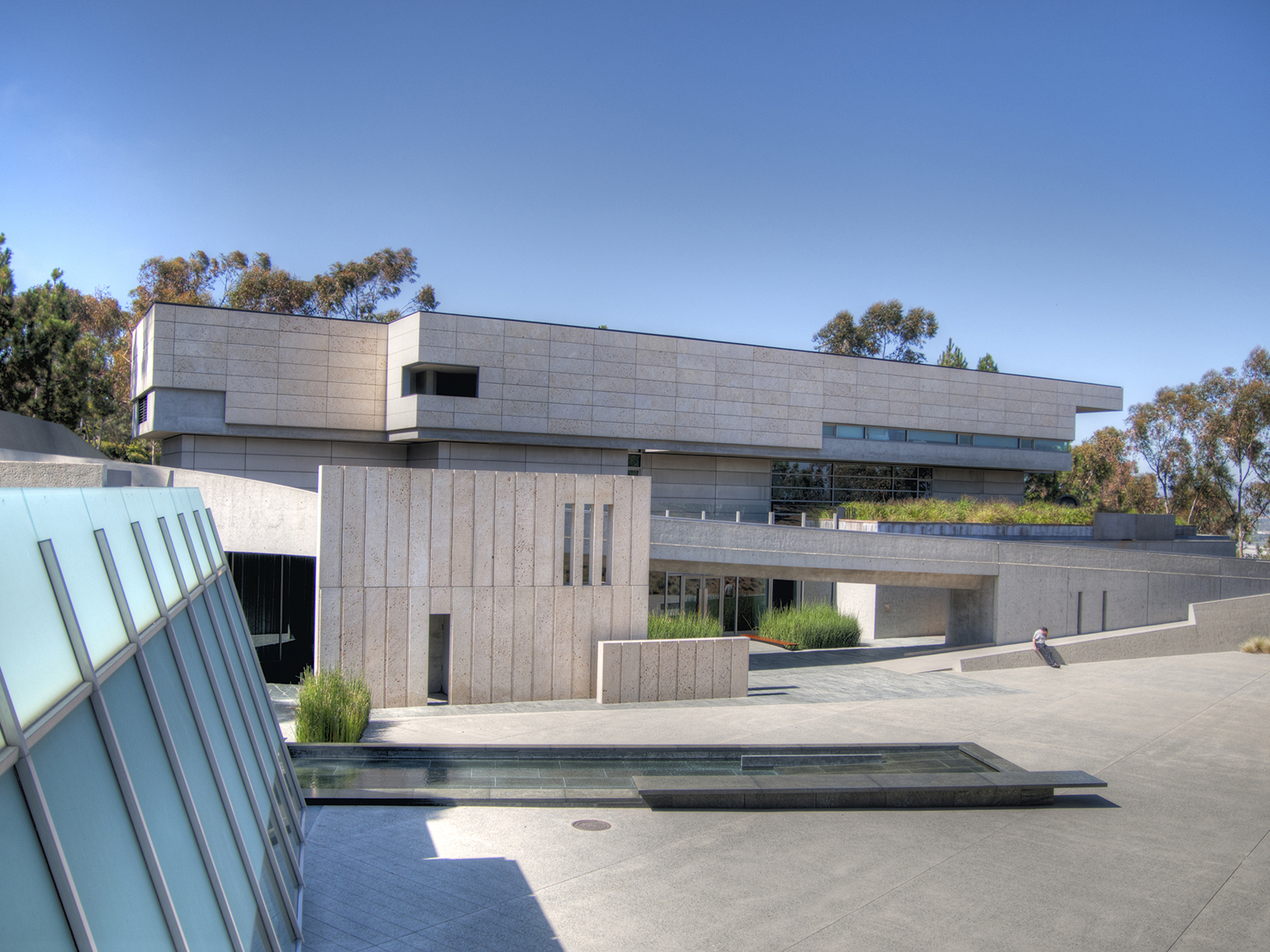 Our client Dr. Edelman asked us to design a “monastery for scientists.”

The Neurosciences Institute is a theoretical and clinical research campus for the study of the brain. The program is comprised of a theory center, laboratories, and an auditorium. The three buildings are arranged to form a central plaza that unifies the entire project. Cutting into the sloping site, the buildings maintain a low profile and a strong connection with the land. As a result of this partially buried condition, the landscape and the buildings form a quiet courtyard. The open yet sheltered space encourages interdisciplinary interaction.

The Theory Center wraps the plaza on the north side. This is the largest of the three buildings. It is three stories and houses a library, reading room, refectory, conference rooms, administration offices, fellows’ offices and computer rooms. A 352-seat auditorium sits in the center of the plaza and is a gathering place for the scientific community and the larger public. Enveloped in an origami-like folded plaster wall, the interior allows for the maximum dispersion of unamplified sound. This careful engineering of the interior space accommodates both lectures and unamplified chamber music and the venue is frequently rented for musical concerts by outside groups.

Single-story laboratories form the wall of the south side of the plaza. A continuous etched glass window faces the plaza. Offices are arranged behind the glass and light enters while privacy is maintained. Wet labs, located behind the offices and below grade, flank either side of a corridor.  The roof of the laboratory building is a terrace which can be accessed by a stair and inclined walk from the plaza below.  The glass of the windows continues vertically past the roof to act as guardrails for the terraces above. A tunnel from the terrace level provides access to Scripps site across the road.

The use of sand blasted concrete accentuates the project’s solid and grounded presence. For each office, we made small unique bas-reliefs that were set into the concrete. We also used metal cups in the concrete formwork to make shadow casters in the outdoor stairways. These are small surprises to be discovered as the building is used. Warm redwood, Texas fossil stone, dark green serpentine stone, and bead-blasted stainless steel create quiet, yet complex textures and a tactile sensuality. Every part of the institute – from the furniture to the materials to the building and the landscape –shapes a coherent and serene environment.

In 2014, the Institute moved to smaller quarters. The space is now used by Scripps for its molecular imaging department.